Picture this scene: King Nebuchadnezzar of Babylon has attacked Jerusalem, defeated it, and taken captives back to Babylon to work as slaves. Now you have to understand that Jews thought that this could never happen. Jerusalem was God’s holy city where His temple and king resided. Babylon was the epitome of evil. As unthinkable as it is for us to imagine, say, Iraq conquering America and taking the vast majority of Americans back to the Middle East as slaves; that’s at least as unlikely as the nation of Judah thought about this happening. There’s just no way. But it did happen.

The prophet Jeremiah managed to escape the siege and stays behind in a war-sacked Jerusalem with a few others. God’s people feel completely abandoned by God in Babylon. So Jeremiah writes them a letter to encourage them. This is part of what he says:

“This is what the Lord of Heaven’s Armies, the God of Israel, says to all the captives he has exiled to Babylon from Jerusalem: “Build homes, and plan to stay. Plant gardens, and eat the food they produce. Marry and have children. Then find spouses for them so that you may have many grandchildren. Multiply! Do not dwindle away! And work for the peace and prosperity of the city where I sent you into exile. Pray to the Lord for it, for its welfare will determine your welfare.”” (Jeremiah 29:4–7, NLT)

This translation uses two words, “peace and prosperity,” to translate one Hebrew word – which may be the only Hebrew word you know – shalom. We tend to think of shalom simply as “peace,” like a bunch of hippies sitting around in a circle smoking doobies and singing Kum by Yah. But the word shalom is so much richer than that, which is why they use two words to translate it. Shalom doesn’t just mean peace, as in absence of conflict. It denotes universal holistic well-being – personal well-being: mind, body, spirit; but also interpersonal well-being: social, societal, financial. Basically, it’s like saying, “May you flourish in everything you do.” God is telling His people in captivity to live in the city of their captors and invest in the cultural world and societal good of their enemies.

So imagine you are a Jew from Jerusalem living in captivity in Babylon. The thing you thought could never happen has happened. This is a horrible defeat, not only for a nation, but for a culture and religion. God has not just allowed a nation to be defeated. He has allowed paganism to overcome Judaism. Everything they had, everything they knew, everything they believed was stripped away. And now the God who has abandoned you to this fate is telling you to seek the welfare of those who have taken away your welfare. That is a tall order! 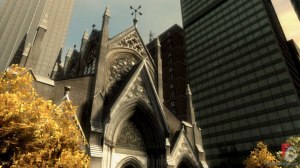 For a variety of reasons there is often a tension between churches and the city (in general). When I say “city” I’m not just speaking of city government, but also culture, commerce, and community; everything that makes a city a city. Sometimes the relationship between church and city is good. Sometimes it is bad. Often times it just isn’t. A church’s relationship with its city typically takes one of these forms:

1. Church IN the city – These churches are geographically in the city, but they aren’t engaged with the people and culture of the city. All the activity takes place inside the church building. This type of church sees the city as evil to avoid.

3. Church OF the city – These churches go to the opposite extreme and wholeheartedly embrace the culture of the city; so much so that they don’t really offer anything unique to the city or distinct from the city. They may do good works, but they have lost their ability to speak truth into the city. This type of church sees the city as a maiden to marry.

4. Church INTO the city – This type of church has a real desire to reach its city, but on its terms. It is a lot like the “church against the city” except that it does go into the city, but it does so in order to make them like us rather than to truly help and serve. These churches see the city as a problem to solve.

5. Church FOR the city – This type of church seeks to help its city flourish by serving its needs while also boldly proclaiming the truth of the Gospel for a city in need of hope. These churches see the city as a friend to help.

As God’s people living in a particular community, we are called to work for the shalom of the city in which we live and worship. We are commanded by God to work hard to help our city and its people flourish in all that they do.

What about your church?

What can you and your church do to work for the shalom of your city?